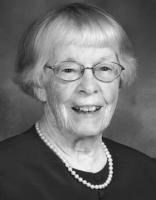 Abbie Ann Bates, 94, passed away Dec. 19, 2015 at a Vancouver, WA hospital. She was born Aug. 5, 1921 in Colfax, Dunn County, WI, the daughter of Albert Richard Burling and Anna Lena Woods. She was educated in Wisconsin and moved to Reedsport, OR with her parents and eight siblings in 1937. The memorable trip was highlighted when their truck and house trailer became snow bound in Elkton, OR.
Abbie married Henry L. Miller on May 22, 1942 in Santa Barbara, CA. They moved to Vancouver, WA about 1948. Henry died in 1971 and Abbie married her second husband, Edwin L. Bates in 1972. They were dedicated members of the First Presbyterian Church for over 50 years. Early on, Abbie taught Sunday School. As members of the church choir, they enjoyed trips to Europe where they performed with the vocal choir and Bell choir. Abbie was a member of the Presbyterian Women's Committee. Ed and Abbie were active in the Good Sam Camping Club, traveling over the United States extensively. She was a member of the Maapers, enjoyed cross country skiing, reading, knitting, and was into fitness, swimming every day at the Lake Shore Athletic Club. She was an avid gardener and especially loved flowers.
Abbie met life's challenges with inspirational spirit and grace and was a loving aunt to her extended family.
Abbie is survived by her daughter-in-law, Carol Miller; step-sons, Charles, Curtis, and Clifford Bates; brothers, Richard D. and David Burling; and 23 nieces and nephews.
She was preceded in death by her husbands, Henry Miller; and Edwin Bates; brother, Merle; and sisters, Marileen Hamme, Betty DiBendedeto, Bonnie Barnett, and Elva Winegar.
A memorial service will be held at 2:00 p.m., Sat., Jan. 9, 2016 at the First Presbyterian Church, 4200 Main St., Vancouver, WA 98663.
In lieu of flowers, charitable gifts can be made to Doernbecher Children's Hospital, Portland, OR or First Presbyterian Church, Vancouver, WA.
Please sign her guest book at: www.columbian.com/obits.
Published by The Columbian on Jan. 3, 2016.
To plant trees in memory, please visit the Sympathy Store.
MEMORIAL EVENTS
To offer your sympathy during this difficult time, you can now have memorial trees planted in a National Forest in memory of your loved one.
MAKE A DONATION
MEMORIES & CONDOLENCES
9 Entries
Our Aunt Abbie's love will remain in our hearts forever. I cherish my fond memories of playing cards, making waffles, singing songs, exploring caves and beaches- so many nature walks! I remember the laughter and still feel the love shared. My thoughts and prayers are with her family and I am sorry not to be attending the service. As you grieve know that the Kirkman girls are remembering you and honoring our dearest Aunt Abbie.
Jill Kirkman Poulsen
January 9, 2016
We will miss our weekly phone visits with Abbie. Abbie was an inspiration for us throughout the years.
Howard and Glenna Bates
January 9, 2016
A very special lady I will miss very much. She and Ed were close friends with my parents and I remember their many times together camping and such. I always appreciated her open honest statements and her main one to me was my parents had their memories, and I needed to go and make my own. I did and I thank her. Special thoughts to the family.
Judi & Jerry Cammack-Brower
January 9, 2016
Always kind and gracious. Bless you Abbie. Our sympathies to the family.
Mary Mulcrone
January 8, 2016
I am assuming Abbie was the wife of my friend, Eddie Bates with whom I worked at Portco Corporation in Vancouver, WA. He was such a sweet man and we knew he had a sweet wife as well. Sorry to hear of her passing and I'm sure they are together again, smiling as always. Sharon Sue Geiger
January 6, 2016
May God bless you and your family in this time of sorrow.
Mike & Jeriliue Hopley
January 6, 2016
Aunt Abbie inspired me because she helped others as when she had me and my mom & dad live with her. She started the day swimming and read with kids in school and did many other 'good deeds.' She also knew how to stay healthy physically & spiritually. She smiled & laughed often and that's how I remember her.
Janice Mcdonell
January 5, 2016
Abbies Family ~ I knew Abbie from water aerobics. I did not know her well but we said hello when we saw each other she was a nice lady. I am sorry for your loss ~
Carley Adams
January 4, 2016
You were so special in our family. We enjoyed the best vacation ever when we went to Alaska with you and Ed. You will be missed.
Don and Joy Casey
January 3, 2016
Showing 1 - 9 of 9 results